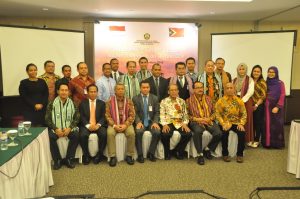 Bali, Indonesia, Indonesia’s Ministry of Energy and Mineral Resources hosted a Timor-Leste delegation in Bali Indonesia to discuss the potential cooperation between the two countries in the Oil and Gas sector.  The Timor-Leste’s delegation led by President of the ANPM Mr. Gualdino da Silva and the delegation members consist of the Institute for Petroleum and Geology (IPG, I.P), TIMOR GAP, E.P. (the national oil company) – representing the Ministry of Petroleum and Mineral Resources of Timor Leste,  and the observers from the Ministry of Foreign Affairs and Cooperation. The Indonesian side, the participants consists of the representatives from the Ministry of Energy and Mineral Resources, the Research and Development Center for Oil and Gas Technology, Pertamina, the National Gas Company (PT. PGN), PT. Rekayasa Industri, PT. Patra Badak Arun Solusi, and PT. Badak NGL.

This bilateral meeting is a follow up of subsequent engagement and participation of Timor-Leste during the Indonesia’s Oil and Gas Partnership Program. Furthermore, the signing of the Memorandum of Understanding between Ministries of Foreign Affairs Republic of Indonesia and Timor-Leste on 26 January 2016 on Energy, Petroleum and Mineral Resources Cooperation became the impetus to solidly tie the relationship between the two countries.

During this bilateral meeting, the two countries shared its knowledge, experiences and achievements in the oil and gas sector. The fruitful discussions of the meeting bear several actions plan to be conducted by the working group in the future, these actions plan encompass:

The delegation from both Timor-Leste and Indonesia also agreed to extend the cooperation to Mineral sector in the future bilateral meetings as stipulated in the MOU. The working group has also indicated that the next bilateral meeting will be held in Timor-Leste on the 2nd quarter of 2017.