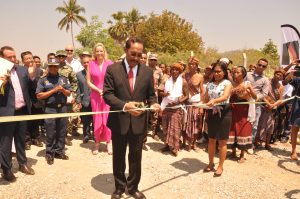 The Fafulu 2D Seismic survey is carried out under the Onshore Production Sharing Contracts (PSCs) TL-OT-17-08 and TL-OT-17-09. These two (2) PSCs are the first onshore Timor-Leste’s PSCs, signed on 7th of April, 2017.

The two (2) PSCs were awarded to TIMOR GAP Onshore Block, Unipessoal, Lda., a subsidiary of Timor-Leste’s national oil company TIMOR GAP, E.P. and Timor Resources Pty Ltd, a company incorporated in Australia and part of the Nepean Group of companies.

Each joint venture holds a 50% interest with Timor Resources taking on the role of operator.

The Minimum Exploration Work Requirements in the initial period for the PSCs includes the acquisition of 100km of 2D seismic lines in each PSC. In this Fafulu 2D seismic survey, Timor Resources Pty Ltd and its Joint Venture partner is going to acquire a total of 308.4km in both PSCs.

The two (2) contracts cover highly prospective areas, where oil and gas seeps can be observed. The Fafulu 2D Seismic Survey is a crucial step to explore and identify the drillable prospects within the PSCs boundaries.

ANPM President Mr. Gualdino da Silva, stated that the “ANPM commends Timor Resources and Timor Gap which takes up the challenging role to be the pioneer of the onshore seismic survey in Timor-Leste and looks forward for safe and timely delivery of commitment under the PSCs.” 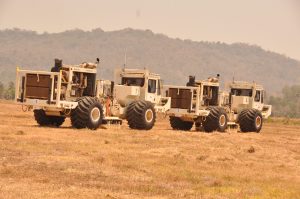 The Vice President of Nepean Resources and Managing Director of Timor Resources, Ms. Suellen Osborne, said that the onshore oil and gas potential of Timor-Leste has long been recognised but has remained largely untapped and under- explored due to historic geopolitical issues. “We are delighted to be the first independent company in over 40 years to carry out exploration here on this land. There is definitely oil present in these on-shore permits, it’s a question of how much oil there is and whether the discoveries made will be commercial.”

Minister of Defence, Mr. Filomeno da Paixão de Jesus said that the partnership between Timor Resources and our national oil company, is very encouraging and that “the 2D Fafulu seismic survey marks a significant milestone to move our onshore oil and gas forward and exemplify the readiness of Timor-Leste to host millions of dollar investment.” With that said, Mr. Filomeno continued by stating that it is important to cooperatively working to reconciling the goals of the company and the Government – to advance in building a skilled workforce, developing local industry suppliers to be capable to meet international standards, therefore to increase the employment among Timorese youth, bringing more income through taxes and creating more opportunities for the people from the affected areas and its surrounding, multiplying the services provided by them. End